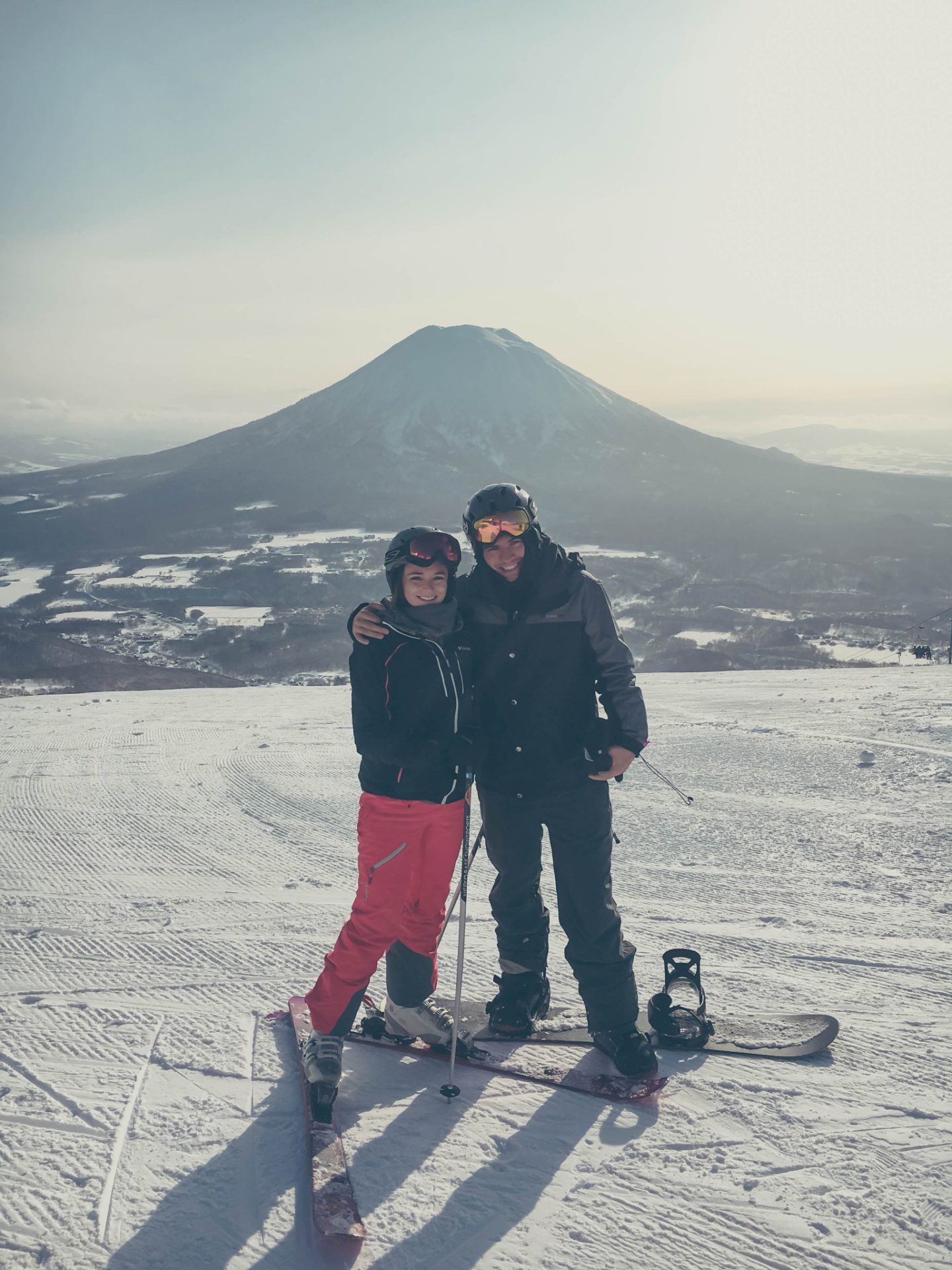 Ever since I heard about the insane powder skiing in Japan two years ago, it had been at the top of my bucket list. It was also at the top of Zane’s bucket list, so it was pretty easy to make it a priority to go together!

There was soooooo much powder, I had never experienced anything like it before, it was awesome! We had four days of skiing in Niseko. On our second day we had the freshest powder because it had snowed so much the day before. It was then that we discovered this back country section of the mountain with glades, and although it was a little bit of an uphill hike to get to, it was totally worth the extra effort. We skied that section so many times because each time we went back, there was another un-skied route to go down. I loved skiing through those back country glades, knee deep in powder, with no one else around. We lucked out on our third day with sunny skies and no clouds, which is apparently super rare in Niseko. On a sunny day there, you can see Mount Yotei in the near distance, which is an inactive volcano. I had never seen a snow covered volcano before! It was so surreal skiing down the mountain with a clear view of the volcano.

Having only ever been to North American ski villages before, it was super cool to experience the ski village of Niseko. So many great restaurants and bars. We went to this one really cool bar that was like a little Japanese den, where instead of seats you sat on cushions on the floor with low tables and drank sake, and the walls were draped over with curtains. Another great place was this bar called “The Fridge”, and you literally entered though this tiny little red fridge door! I even had to bend down to fit! Once you got through it was a really nice and big place, with a pretty good whisky selection that Zane enjoyed. For dinners we always had great Japanese food at one of the restaurants, and were able to do some sake tastings as well. I also really loved how on the mountain instead of getting poutine or a burger, I could get crab ramen!

After Niseko we flew back to Seoul for a few days. I had so much fun in Seoul! Zane had to work during the days which meant I had a lot of time to explore on my own. I loved walking around and exploring all the different neighbourhoods. We went to a couple Korean BBQ restaurants, and I thought it was so cool how each table had a mini BBQ built directly into your table, so you could cook the food yourself! I also really loved the random arcade rooms around the city. One night Zane and I were walking to dinner and passed a tiny little room literally filled with those claw arcade games, where you try and pick up a stuffed animal. We went inside and were the only ones there, and I won a stuffed animal. So fun!

On another day I went hiking in Bukhansan National Park, which is a big national park right in the middle of Seoul, accessible by public transit. It was beautiful hiking through those snow capped mountains overlooking Seoul in the winter… but in truth it was also pretty dangerous. It became steeper and icier the higher I went, and I didn’t have proper hiking gear. I got pretty scared at one point nearing the top and had a scary climb back down. Live and learn! Everything before that though was really great, I love hiking.

I think one of my my favourite moments in Seoul was when Zane took me to a Soju tent for a little pre dinner appetizer. Soju tents are kind of like Toronto’s version of hot dog stands, except they are larger, covered by a tent, and serve alcohol. We had rice noodles and drank soju. It was so cool and so much fun! A very local thing to do, and I also loved the noddles!

After Seoul we went to Tokyo for a weekend before I had to fly back to Toronto. As soon as we got there on Friday night we went out to have ramen for dinner, because Zane is obsessed with ramen. I discovered that I am obsessed with soba noodles! That is my Japanese food obsession. We also went to this bar district called Golden Gai. I wish I got pictures but my camera battery was dead. Golden Gai is made up of rows and rows of narrow alleyways completely lined with these tiny bars sometimes stakced on top of each other, which only seat about 5 people. It’s super cool and fun to walk through while peeking into various bars to see if they have a spot for you.

The next day we visited some temples and the Shinjuku Gardens, where we saw a dog that would pose for pictures on command! In the evening we went to the bar where Lost in Translation was filmed and were able to see Mt. Fuji in the distance. After that we went to a cocktail tasting at Gen Yamato which was written up in this New York Times article. Super cool creations using ingredients you would never really think of for a cocktail. We finished off our last night with an amazing sushi dinner. We had a local recommend and a make us a reservation. It was a small place with only only enough seating for us and one other small party. Instead of menus, we were served whatever the sushi chef was preparing, with everything being made right in front of us. Best sushi I’ve ever had obviously!

We spent our last day shopping and eating whatever we wanted (Japan has a lot of fun and delicious desserts). I had my first real soba noodles for lunch that day. The noodles were plain, and I had a cup of tahini sauce to dip the noodles into myself. I was hooked! They were so delicious, and it’s one thing I’ve been majorly craving since leaving Japan, along with tempura ice cream.

Japan was beautiful, exciting, interesting and so much fun, and I can’t wait to go back to eat and explore it some more oneday!