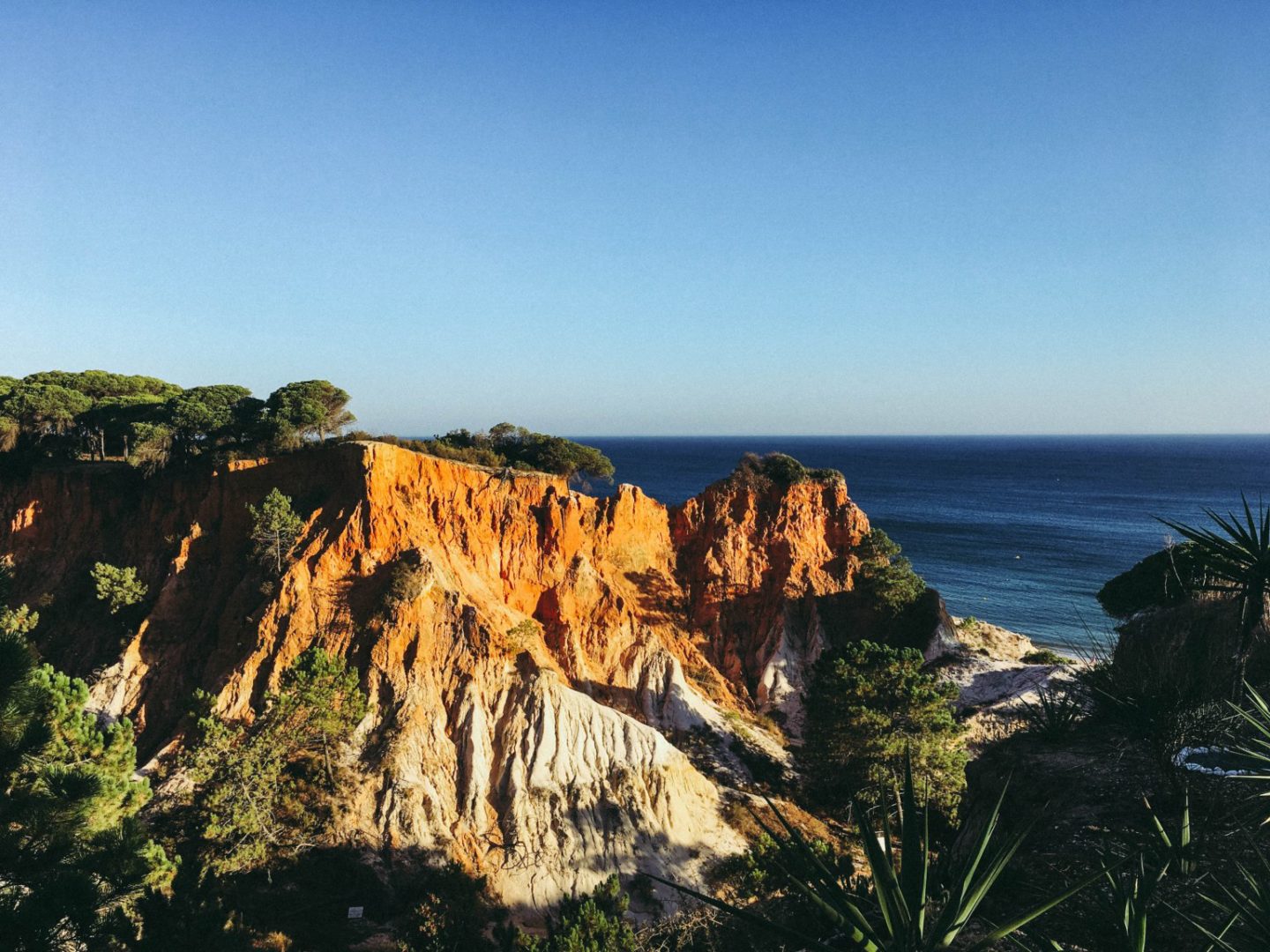 After Seville we took a train to Albufeira in Portugal. We stayed at a resort up on the cliffs over the ocean, with steps that led all the way down to the beach. The two days we had in Albufeira were a welcome relief from the jam-packed schedule of tours and sight-seeing we had been doing for the last week in Spain! I’m definitely not complaining about it, I am so happy we were able to pack so much in and what an awesome experience it all was, but it was definitely nice to just chill out, relax and do whatever we wanted all day. I finally got to use a gym there and get in some proper workouts which felt amazing. We spent lots of time on the beach, by the pool, at the spa, and even had a Portuguese wine tasting one afternoon. One of my favourite parts about the resort in Albufeira was their outside patio bar that sat right on top of the red cliffs overlooking the ocean. It was the perfect spot to have a drink and and watch the sunset!

After Albuferia we went to Lisbon. We stayed in a restored 19th century palace just on the outskirts of downtown. It was a beautiful old hotel with an amazing pool and gardens all around that you could walk through. In the mornings we would sit outside by the gardens and have our breakfast, and spent all our time at the pool in between tours and sight-seeing. One morning while we were there we went on a tour of Pena Palace, which is a huge palace at the top of a mountain. It was interesting because many parts of it were built during different times, so the architecture is noticeably different throughout, and it was so colourful! In Lisbon we also had our second food tour and I finally got to have one of the famous pasta de nada’s in Portugal! I first tried these Portuguese egg tarts in Montreal when I lived there, and was so excited to try them in Portugal when I found out we were going. It was incredible! Just so warm and delicious, I could have easily eaten half a dozen. We drank Ginjinha, which is a Portuguese liqueur made from sour cherries, and also ate snails! It was my first time ever eating snails and to my surprise, I really enjoyed them!

After Lisbon we went to Porto, our final stop. Porto was my favourite place in Portugal. It is a coastal, medieval city right on the river and is made up of narrow cobbled streets. I thought the food in Porto was the best we had in Portugal. Every single meal was so good, especially the seafood which was so fresh. I loved walking around Porto, especially at night along the river and seeing it all lit up. It had a really relaxed vibe and was a great place to just sit and people watch by the river.

While we were in Porto I actually drove back into Spain for a day with my parents to see the Santiago de Compostela cathedral, which had been on my Dad’s bucket list for a few years. It’s the final stop of the Camino de Santiago, an ancient pilgrim route stretching across Europe. It was a long but very pretty drive, and we tried to get there in time for mass. When we arrived, there was a huge lineup to get in and mass had already started. I was feeling anxious that we wouldn’t be able to get in and see mass, not for myself but because I knew my Dad really wanted to experience it and this was a big reason for planning the trip. I said a little prayer that we would make it in for at least part of the mass and then we waited. Luckily about half an hour later, we finally got in! It was huge inside with so many people, but plenty of room to stand and walk around and watch. We actually got to see the entire last half hour. At the end of mass we also got to see the famous ‘Botafumeiro’,  a famous giant censer that weights 63 kg when full. Apparently this was used in the Middle Ages as a way to clean the air when crowds of smelly pilgrims arrived after completing their long journey. After mass it was lowered down, and a group of men started swinging it like a pendulum, slowly at first and then eventually so high it was close to the ceiling. It was really impressive! I was so happy that our day-trip was a success and we got to experience mass and the Botafumeiro. I am so glad I got to experience this with my Dad and tick it off his bucket list, and it’s a day I’ll always hold close! After mass we went to have lunch and obviously I had to get tapas since we were back in Spain. Lucky for me the tapas I had that day were the best I’d had in Spain!

I was so grateful for the time I got to spend with my family on this trip before I move to Hong Kong. Even though big family trips like this are getting harder and harder to plan, I’m so lucky that my parents have tried to make travelling as a family a priority, and it’s something I’ve grown up doing. Another epic Konn adventure!