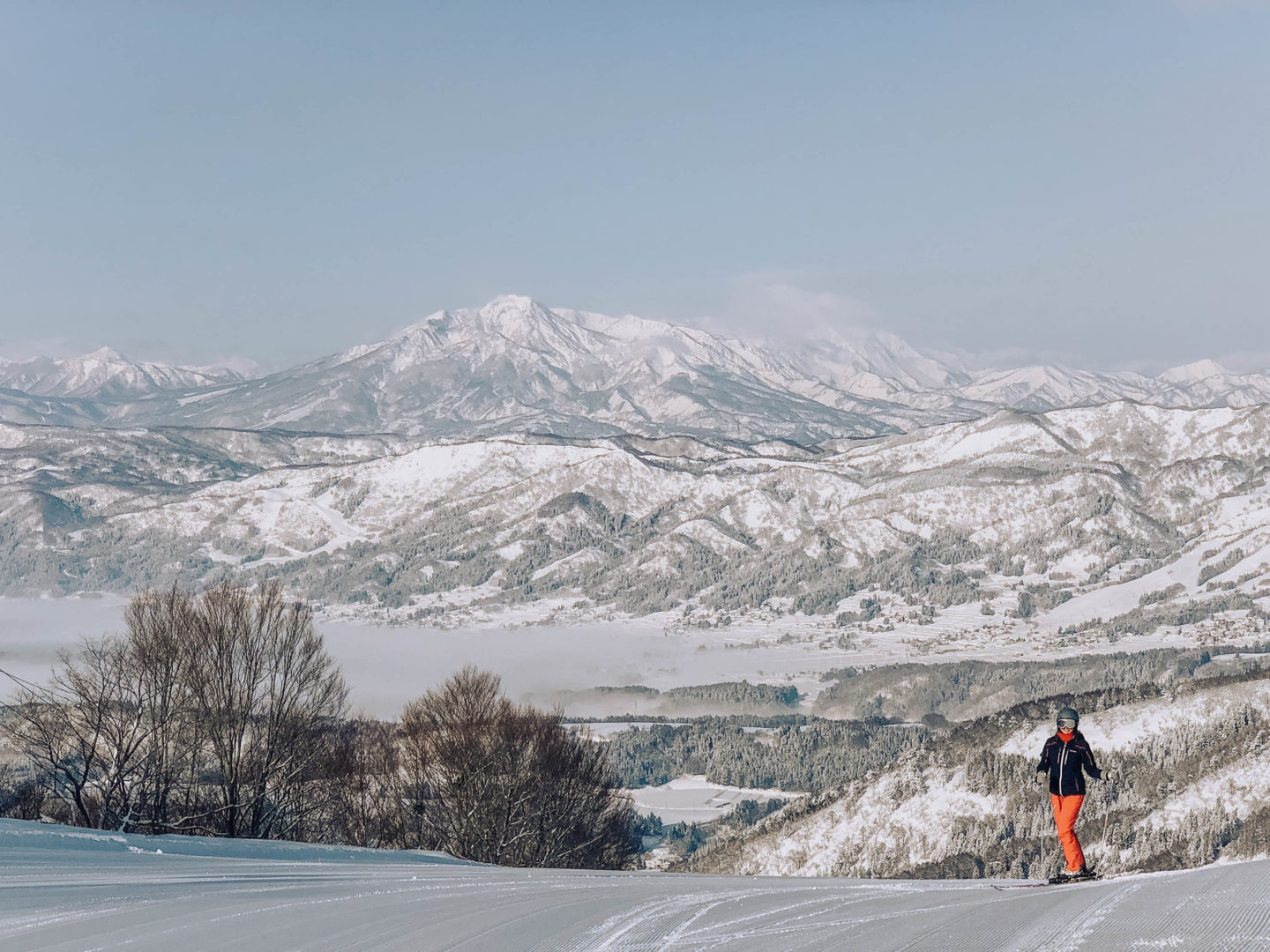 Zane and I went skiing again in Japan this year over the Lunar New Year holiday, when all of the schools and offices shut down for a few days. The celebration is as big as Christmas here in Hong Kong. It’s pretty sweet getting two big holidays in one winter haha. The powder that Japan gets is the best in the world, and we want to make the most out of it while living here. Last year we went to Niseko which is on the island of Hokkaido in Japan and LOVED it – you can read about that post back here. This year we decided to try something different. Nozawa Onsen isn’t as touristy or well known as Niseko, but it is the oldest ski resort in Japan! The Winter Olympics were actually hosted there once. It’s quieter and older, but the skiing is just as good so we were interested to try it out.

We flew into Tokyo and then took a four hour drive to the resort. The drive was really beautiful, and we both got so excited when we started seeing the mountains. We had some lunch when we got there and then took a snowmobile up to our ski chalet. It was a ski-in/ski-out chalet literally situated half-way up the mountain! The only way to access it was by snowmobile or gondola, no roads. The place was stunning. Huge floor-to-ceiling windows all around, giant couches, wooden beams – it very much embodied that whole Scandinavian ‘hygge’ vibe, and felt like you were living in a snow globe.

Our first night there we took a snowmobile to a restaurant on the mountain for dinner and I went right for the soba! I’ve been thinking about the soba we had in Japan last year so much recently, and couldn’t wait to have some more! It did not disappoint! Why can’t anywhere else do soba as good as Japan?

Waking up the next morning in our snow globe bedroom was so beautiful! The clear sky we woke up to didn’t last long as the clouds rolled in bringing all that famous Japanese powder! We couldn’t wait to get out! As soon as we saw the chair life start moving we knew that the mountain was officially open for the day and we quickly got on our ski gear to get those first tracks in. It was an amazing, super fun morning. Non-stop smiling and cheering while floating through all that powder.

The snow continued for two days straight. We were actually snowed in our second night there – we wanted to go down to the village, but it was too dangerous to snowmobile us back up that night. Our hosts were so accommodating though and brought us bento boxes and sake, so we had a cozy night in watching movies, eating takeout and looking at the falling snow.

The next morning was the best powder day. I literally would scream with joy going down runs. The snow had stopped but there was powder up to my knees, it’s such a crazy feeling skiing in all that! We had two days of fresh snow, followed by two sunny days. It was perfect! Nothing beats skiing in Japan in my opinion, the snow is always so good! We had the best time, and it was so nice to just ski right up to our door when we needed a break or were done for the day. We loved skiing in Nozawa so much that we already decided that’s where we’re going next year.

I have to do a shoutout to the FOOD! I loved coming in and having soba, ramen, or Oyaki dumplings! These dumplings are unique to the area, and are steamed and typically filled with pickles or pumpkin, but I also had apple and red bean. So good! Also why do cold chocolate bars on the ski hill taste so good? I must also do a shoutout to my Dad for this one! I remember he showed me this secret on one of our ski trips when we stopped on the mountain while skiing to share a snickers. Since then I always have to have a snickers bar in my pocket and look for the perfect moment to pull over for a snack 🙂

The village was also really cool! It is a completely authentic Japanese village unlike Niseko. There is no western influence here at all, and onsens everywhere! We didn’t get a chance to have an onsen this time but next year for sure, they’re everywhere in Nozawa. You can actually smell the sulphur sometimes and you can hear the waters rushing when you walk through the village. We had some great meals in the village, including the best ramen one night that Zane went to great lengths to find out about and then we had wait until it opened which was strangely really late haha. We also drank wasp liquor… yes liquor with wasps in it, that’s a thing, and ate crickets. When in Japan!

Another amazing ski trip in the books with my favourite skiing partner who is actually a snowboarder but we make it work 😉 Until next year Nozawa!

A few photos below – we were pretty horrible with taking pictures this trip, it was just snowing so much we could never take the camera out!