Travel
NEXT
My Favourite Place in the World 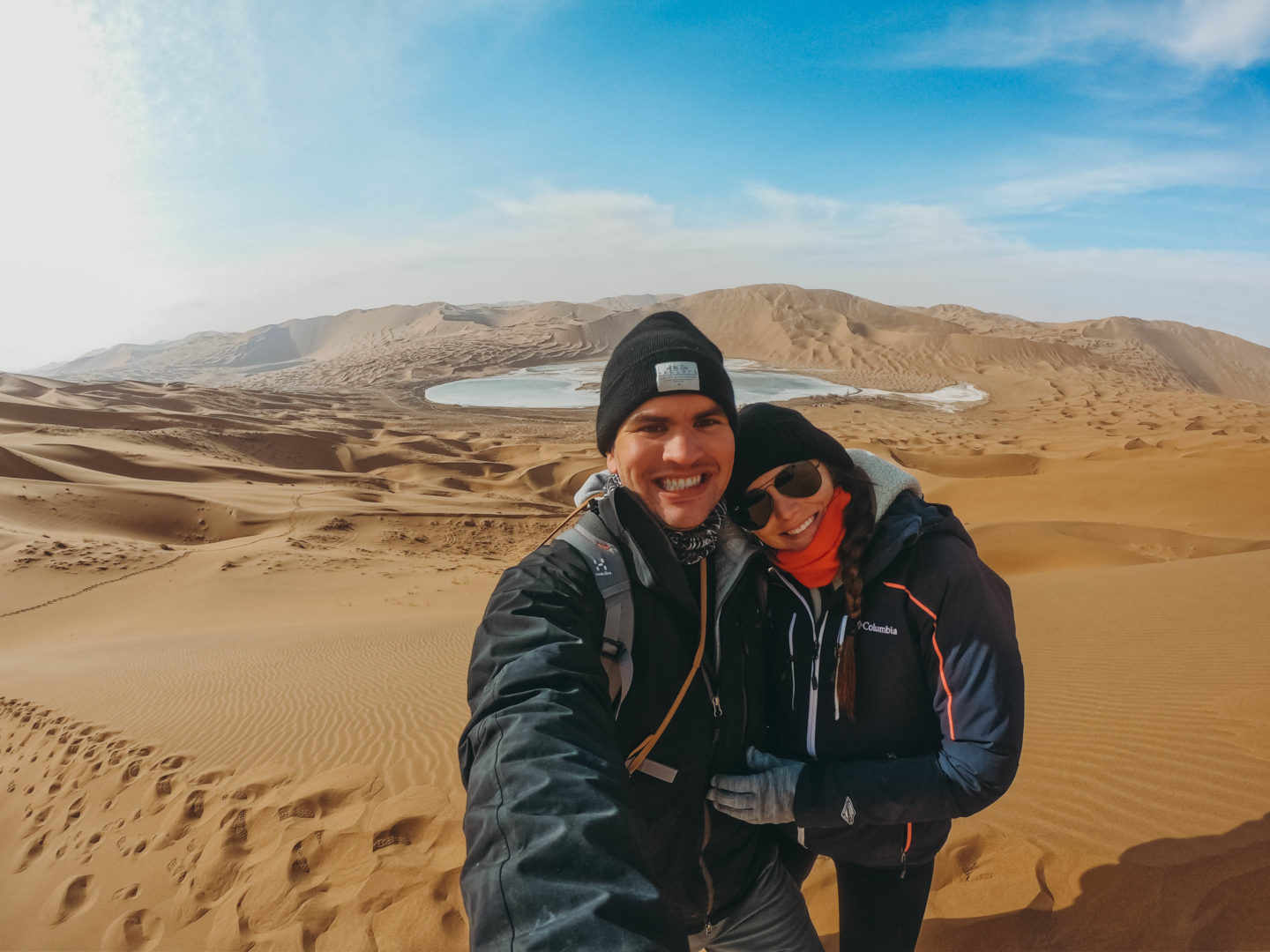 The beauty of going to the Gobi Desert in the wintertime is because, if you’re lucky, it will snow. And the contrast of the white snow against the orange sand and the bright blue sky is surreal and truly out-of-this-world beautiful.

Our first three days were cold and snowless, but it was still beautiful. Neither of us had ever been to a desert before. You might think it would get boring hiking hours on end through a desert, but that actually wasn’t the case. The views truly never got old, it really did feel like you were in another world or some sort of storybook. We climbed some massive dunes and would admire the 360 degrees view we had at the top. I loved balancing on the ridge of one of the big ones and walking along. We also had camels we could ride on when we got tired, however hiking actually kept me warm and whenever I would sit on a camel for too long I would start to get really cold.

We stayed at the homes of Mongolian families who live in the desert. These weren’t hotels, and there was no plumbing or heating. The toilet was any sand dune you could find that gave you some privacy. Each room slept 3-4 people, and for heating there was a single coal stove in each room which you had to keep fuelling throughout the night. Dinners were whatever animal was just killed that day (usually lamb, one night we had beef), and maybe some rice. Breakfast was eggs and crepes (not the buttery French kind, more like thin fried bread). It wasn’t luxurious, but it was an adventure.

I’d be lying if I said it wasn’t extremely hard sometimes. The beds were wooden slabs with a very thin cotton pad on top and I had to adjust myself throughout the night because whatever side I was lying on would start to hurt and wake me up. Sometimes I was so cold my fingers and toes would be numb, and it would take about 20 minutes of hard hiking to warm back up. Other times I was so tired from hiking but it was too cold to ride a camel and I felt defeated. One night the door to our room wouldn’t close all the way which let in the freezing cold (got down to about -30 degrees at night) and so we had to find a giant metal pole to prop up against the door with a brick to keep it shut haha. But all of this was intermixed with some of the most beautiful, gratifying, once-in-a-lifetime experiences and I was so happy and grateful to be there with Zane on that adventure.

On our second last morning, Zane woke up and looked out the window and yellow “SNOW!”. Our friend Rob and I started laughing at him, we thought he was just seeing ice from the lake. We didn’t believe him haha. Turns out he was right! The weather wasn’t even calling for any snow while we were there, but that morning we woke up to the desert blanketed in a thin layer of snow. I was so happy we were going to get the full Gobi Desert in the wintertime experience!

Below are some photos from our trip. Words don’t do this place justice and neither do the pictures really, but it gives you a better idea. ALSO, Zane had just got the new go-pro for this trip (which is a seriously amazing camera). So each photo you look at, imagine hearing Zane saying “go-pro, take a photo” and that was our trip 😉 haha.

All bundled up on my camel. This camel was actually my favourite one to ride.

See the Mongolian riding the camel in the back? His name is Hassemon, and he was our desert guide. We stayed at his house our first and last night, and it was his camels that we took through the desert and him who led the way. The first night we stayed with him was Chinese New Year, and they lit some fireworks for us to watch. His wife also cooked an ENTIRE lamb and when it came out it was literally just a massive lamb, tail and everything haha. It was great.

Hassemon is simultaneously the kindest and most badass man I’ve ever met haha. I mean, we were all decked out in intense hiking gear for our 5 day trek and he looked like he had just thrown on some clothes to go walk the dog haha. He didn’t speak any english but he was an amazing guide, shared candy with me and laughed a lot. His teenage daughter also accompanied us on the trek and their relationship was one of the sweetest father/daughter relationships I have ever seen!

One night we stayed in a guesthouse near an old Tibetan temple, pictured above. This was definitely my favourite guesthouse we stayed at, because when we arrived (after a gruelling last stretch of a hike that totally wiped me out and had me freezing since the sun was setting) we were greeted by two older woman who made us delicious hot tea and gave us apples! Fruit in the desert!? It was SO good. Best apple I’ve ever had. The next morning we walked around to the temple which was really amazing to see. I had never seen a Tibetan temple before, and it’s on a lake which was frozen in the winter but I imagine would look like an oasis in the summer.

We couldn’t stop taking picture of the camels, so cute and furry!

We hiked up the tallest sand dune in the world while there, and this picture above was taken half way up the hike. It doesn’t actually look that hight up in the picture, but we had already made some serious ascent by the time this picture was taken. However the last leg of the hike was truly a straight incline and I had to literally crawl up on all fours haha.

At the top of the world’s tallest sand dune!

On our hike down, that little person is me. Walking along a sand dune ledge, I loved doing that.

Woke up to snow one morning!

The above picture was taken while we were hiking during sunset on our last day. It was my favourite time of the trip – snow had melted a bit so you got to see the white snow and orange sand contrast, the sun had come out behind the clouds and was setting, and the temperature warmed up just enough so that it was really comfortable. And it was SO beautiful. Most beautiful thing I have ever seen. I loved those last few hours hiking that day.

I also couldn’t get over the patterns the snow and sand made.

We spend our last night in the desert back at Hassemon’s house, and one of his sheep had just given birth. This little lamb was only a few hours old! SO CUTE!

Also, this baby did the trip with us. He is adorable and it was so much fun having this little adventurer with us.

I am so happy the stars aligned and we were able to do this trip. On our last day I was actually quite sad to leave the desert, even though I was so ready for a hot shower and comfortable bed. The desert, the people… it was the biggest adventure we have ever been on and there is truly no place else like it. This trip will always hold a very special place in my memory.

My Experience Training for and Running the Tokyo Marathon

My Favourite Place in the World